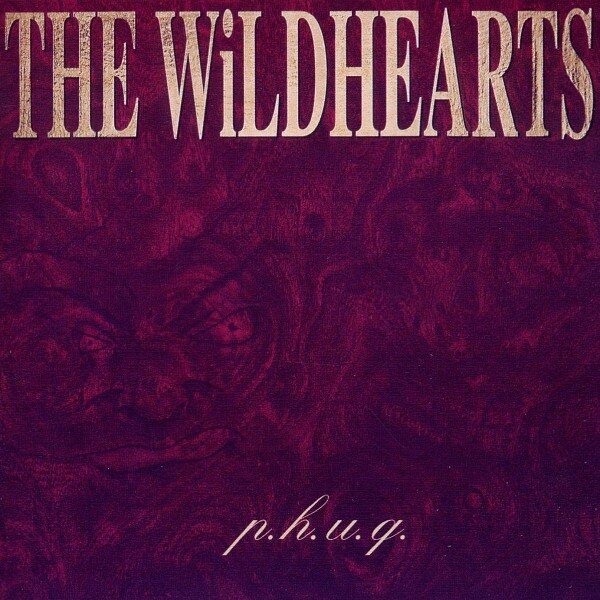 Release Date: 05/21/1995
Label: East West
Genre: Hard Rock/Heavy Metal/Alternative
Reviewed by: Eric Gmutza/Chris Coleman-Peers
Note: These reviews date all the way back to the year 2003. Their tattered remains were recently exhumed from the festering grave of firesideometer B.C. for your viewing pleasure.

Emotional times are always helped by something to pull you through. Well I’ve been having some emotional times recently and P.H.U.Q has pulled me through. This album has seriously changed me on a physical and emotional level, leaving me a much happier and better person. Over the last month I don't know where I would have been without this album. Whereas Biffy Clyro made me realize that music can be beautiful, take me to a higher plane, and even make me cry, P.H.U.Q has helped show me who I am and what I have to do about it.

I can relate to every song on this album. Even the songs with lyrics that (I think) are about drugs, I can relate to on an emotional level. Mostly that level where women have been pissing me off recently. There. I said what you where all thinking anyway. In a sense, P.H.U.Q is probably the greatest unofficial ‘emo’ album of all time. But make no mistake, this is a proper rock album. It does not sound ‘emo’ at all, though it is still an unbelievably emotional listening experience.

The Wildhearts' previous album was a big glam rock affair, in the vain of Guns ‘n’ Roses, with songs about sex, drugs and rock n roll. On this album though Ginger Wildheart, laid out all the feelings he’d encountered since Earth Vs. was released two years prior. Songs about drugs and relationships and pretty much nothing else. On ‘Jonesing for Jones’, Ginger addresses drug use with lyrics like, "Of all the feelings it’s the only choice that my senses make. Say goodbye to the past when I’m sick and twisting." While on ‘Baby Strange’ he sings the lyric: "What does it take to loathe you? Stuck in occasions unfinished and settled," which seems to represent a relationship gone wrong.

As far as the songs go P.H.U.Q is jam packed with riff after riff after riff and massive choruses. Each song has a similar formula, but not one of these songs ever gets repetitive or boring. In fact there are so many things going on in the background of the album, it defies belief. If you listen to it closely, (my suggestion would be on headphones) you will discover some fantastic little hidden guitar and bass lines and vocals that you can’t here straight away. Its things like this that turn a good album into a great album.

The Wildhearts never do anything by the book, and this album is no exception, with numerous songs segueing into one another. This has a startling effect on the album. ‘Baby Strange’, an unexpectedly short song at 52 seconds, segues into the beginning of ‘Nita Nitro’. The latter is probably my favorite track on the album. It opens with a fantastic riff, and then proceeds to stop and start in different places before finally settling on a groove that is so big you could fly on it. Towards the end of the song there is a vocal exchange between Ginger and Danny that blows me away every time I hear it.

‘Woah Shit, You Got Through’ segues into ‘Cold Patootie Tango,’ which starts off with the most pant-shittingly scary guitar note I’ve ever heard. It’s like something out of a horror movie, and if it isn’t it bloody should be. It seriously makes the hairs stand up on the back of my neck every time I hear it. But that doesn’t stop it being a fantastic song. Oh no. After you’ve had your butt whipped with that segue, ‘Cold Patootie Tango’ goes and does it again into ‘Caprice’ which has got to have the biggest riff that I’ve ever heard start a song. It will put a smile on anybody’s face I guarantee it. ‘Caprice’ also contains an incredible bass line that I highly recommend checking out with headphones.

Really, what I've described above is the Wildhearts formula: good songs, riffs aplenty, and some soaring choruses. The only place where the Wildhearts, or should I say Ginger, messes with that formula is the hidden track at the end. It's performed in a weird countryish style, but it's basically saying after all the shit you go through (and Ginger seems to have been through a lot) there’s always a light at the end of the tunnel. It's introspective and ends the album on a lighter note.

I realize I've bared my soul to the world with this review, but that's the effect this album had on me. Not everyone will have that same experience, but the fact of the matter is that this album has made me feel much better about myself lately. And that is what the power of music is all about.

I genuinely  still believe that P.H.U.Q is the best rock album ever laid to tape and that the Wildhearts are still the greatest rock ‘n roll band in the world. Since I wrote this review 17 years ago, I don’t think a month’s gone by that I haven't listened to this album. The beauty about P.H.U.Q is that is still sounds as amazing today as it did back then. Even though I was clearly going through an emotional time back when I wrote this review (it probably wasn’t that emotional in hindsight; it was probably just another 2-week relationship coming to an end in my 20’s. There were quite a few). And even though I am now happily married (and 17 years have passed!), these songs still mean as much to me now as they did back then. Only now they have taken on a new meaning.

This album was also the impetus for Eric and I to finally meet after many years of sharing funny diatribes about the bands we were reviewing on Firesideometer. I invited Eric to come and see the P.H.U.Q anniversary tour in Leeds and amazingly he said yes. Later that year Eric, his wife Kristi, my mate John, and I all rocked out at the Leeds O2 Academy. I still have the picture Eric sent us of our gig experience on my office wall.

It's kind of funny that Chris had such an emotional reaction to this album. Maybe funny isn't the word for it...surprising? It's just that if I hadn't read Chris's review, I never would have thought of P.H.U.Q as being anything other than a really great, eclectic, carefree rock album. The sort of thing you crank up really loud on the first nice day of Spring.

With all the talk about this being a dark album about drugs and failed relationships, you'd be forgiven for expecting something more in the vein-splitting, Drano-drinking, pill-popping spirit of Alice-In-Chains. Instead, The Wildhearts remind me quite a bit more of Ash, a band who also had some success in the U.K. during the '90s but was unfairly ignored here in the States. Both bands share a penchant for anthemic vocals, great riffs, and a seamless blend of pop, punk, and rock. The difference is that The Wildhearts have all the spit and attitude that Ash lacked, and would more than likely kick that band's ass in a bar fight.

The fact that Chris was able to appreciate this album on an almost purely emotional level speaks volumes about the great depth of these songs. P.H.U.Q is so damn catchy that it's tempting to dismiss it as simple, disposable cock rock. And you can thoroughly enjoy the album on that level, if getting in touch with your embarrassing emotions isn't your idea of a good time. But underneath The Wildhearts' thunderous bravado, there is a very real emotional core that ties this album together. It's not the first thing I noticed, but it's definitely there. It's just one of the many things that makes P.H.U.Q such a timeless and absolutely essential rock album.

There's really not a song on here that I ever feel like skipping. The tone of P.H.U.Q goes from trashy radio rock to thunderous metal and back again over the course of this relentlessly fun listen. I'm definitely giving this one a place on My Shelf. Right there between Weezer's Blue Album and Urge Overkill's Saturation, I think.

Looking back on this review, I'm obviously trying to play it cool, and being a bit of a passive-aggressive dick about Chris' emotional response to the album. The truth is, over the decades, I've had the same response to this album. And so has my now 11 year-old daughter who loves The Wildhearts almost as much as I do (they're one of our holy trinity of rock bands along with The Darkness and Harem Scarem).

This album hit me so hard over the years that in 2015, my wife and I decided to hop a flight to the U.K. to meet our good friend Chris for the first time and see The Wildhearts live—once in Leeds and once in London—in support of the P.H.U.Q. anniversary tour. That officially makes The Wildhearts the band I've travelled farthest to see. They were also the impetus for me finally meeting Chris in person after years of writing together on this site, and it turns out the dude is a total mensch and remains a great friend to this day. It sounds like sheer hyperbole, but P.H.U.Q. really is one of those albums that will change your life.

My appreciation for this album has only grown over time. This is a desert island disc for sure and one that no self-respecting rock fan should miss.
Eric Gmutza
Originally Reviewed: 03/04/2003, Exhumed: 07/24/2020