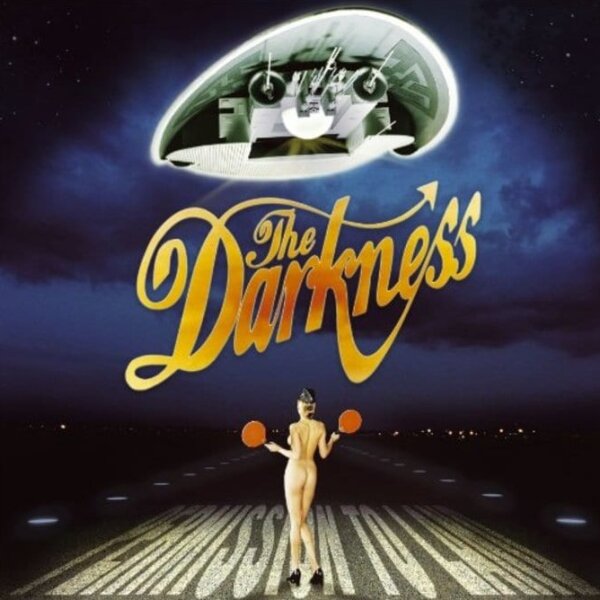 The Darkness: Permission To Land

Release Date: 07/06/2003
Label: Atlantic
Genre: Hard Rock/Glam Rock/Rock
Reviewed by: Chris Coleman-Peers/Eric Gmutza
Note: These reviews date all the way back to the year 2003. Their tattered remains were recently exhumed from the festering grave of firesideometer B.C. for your viewing pleasure.

If you read Rolling Stone magazine, and actually read past that cover shot of Britney's vivacious buttocks, you probably already know that America is about to be taken by storm by the latest British sensation, The Darkness. With the amount of buzz coming out of that country, you'd be forgiven for thinking this band was the second coming of Thin Lizzy or even Led Zeppelin. People seem to be taking this shit quite seriously over there, so I approached Permission to Land with pretty lofty expectations. After the first song, I was speechless. I suspect that most people will have the same reaction upon first hearing the band—"What the fuhhhhh...is this a joke?"

That's the question, isn't it? Vocalist Justin Hawkins' constantly soaring, triumphant falsetto is enough to make Rob Halford blush and probably has Freddie Mercury spinning like a rotisserie at the moment. With cheeky song titles like 'Get Your Hands Off Of My Woman' and 'Love On The Rocks With No Ice', it's pretty clear that the band has a sense of humor about themselves. But Hawkins' earnest delivery makes it hard to do anything but take The Darkness at face value. Permission to Land might very well be a joke, but I suspect it's the sort the band wants us to laugh along with, not at.

For the most part, I'm inclined to go along with them. Opening track, 'Black Shuck' will have you laughing hysterically, even as it thoroughly rocks your socks off. Follow-up, 'Get Your Hands Off Of My Woman' is even better, featuring what is without a doubt the most hilarious pronunciation of the word "motherfucker" I have ever heard. The band pulls an impressive hat-trick with 'Growing On Me', a song that—unfortunately—sets a precedent the rest of the album never lives up to.

Sure, 'I Believe In A Thing Called Love' is fun, but by the time 'Love Is Only A Feeling' rolls around, the what-the-fuck? factor has dissipated and the band has overstayed its welcome. Particularly on the slower tracks, Hawkins' heavy-handed vocals grow tiresome, making the second half of Permission to Land just a tad annoying. Still, you have to respect the gusto with which the band attacks the material. They're on a one-band mission to make rock fun again, and when they're on, The Darkness can be a total blast to listen to. If this were an EP with just the first four songs plus maybe 'Givin Up' and 'Love On the Rocks', I'd probably be scoring this one two or three full points higher. As it is, I'll give them a well-earned Spirit Award.

Well, a lot has changed in the 17 years since I reviewed this album. The three most relevant changes have been the release of One Way Ticket to Hell…, the release of Hot Cakes, and the birth of my daughter who has grown up to be a Darkness superfan (her first concert at age 9 was seeing the band at a small club in Chicago a few years back). All of these things have helped put The Darkness in perspective for me in a way that just wasn’t possible when Permission to Land first arrived. A handful of the songs on the latter half of Permission to Land have...ahem...really grown on me, and my affection for this album has increased considerably over the years.

I now appreciate ‘Love is Only a Feeling’ for the solid power ballad it is. ‘Givin’ Up’, ‘Stuck in a Rut’, ‘Friday Night’, and ‘Love on the Rocks with No Ice’ are all really good songs (though still not quite as strong as those in the album’s first half). ‘Holding My Own’ and ‘Makin’ Out’ continue to not do much for me, but that still puts Permission to Land at about an 82% hit rate. It’s an exceptional rock album, though still only my third favorite Darkness album.

I think it’s to the band’s great credit that so many people (myself included) just couldn’t get their heads around them at first. Justin Hawkins truly is a one of a kind vocalist who revels in the kind of stadium rock excess that even fans of the genre sometimes cringe at. But coupled with their solid riffs and fun, confident songwriting, The Darkness somehow make it all work.

Hmmmmmmmm…. It pains me to say it. But I have to partly—though not entirely—agree with Eric on this one. Whereas Eric is on the fence with The Darkness, I would say I’m over that fence and rocking out in the meadow. This album is by no means flawless, but I tend to think that The Darkness actually justify all the hype they're getting.

So are the Darkness the saviours of British rock n roll? Well it would seem so. Besides the Wildhearts, I can’t think of anyone else making the national charts such a bright place. Both bands have a penchant for anthemic hand-on-your-heart rock music. But the Darkness takes it that little bit further with Justin's over the top vocals. His voice does at first seem hilarious, but I still liked it straight away, finding it the perfect match for the music.

Kicking off with the foot stomping, hands in the air rockathon of ‘Black Shuck’ and ending with the lighters-out, sing-along, power balladry of ‘Holding My Own’, Permission to Land is a great listen. I think Eric has covered all the truly great songs on the album, so there’s no need for me to go into more detail. I will say that ‘I Belive In a Thing Called Love’ is one of my all time favourite songs, though I think it would have been better placed as the first track on the album. ‘Love On The Rocks With No Ice’ is just pure fucking genius and so is ‘Growing on me’ and ‘Get Your Hands Off Of My Woman'.

But like I said, Permission to Land isn’t faultless. I can’t stand the beginning of ‘Black Shuck’. I think Justin is trying too hard to rhyme the lyrics and make them work, and ultimately they don’t. But the rest of the song is fine. ‘Love Is Only a Feeling’ reminds me of Weezer every time it gets to the chorus. Then there’s ‘Friday Night’ which is just down right ludicrous, and frankly just plain cringe worthy.

Still, The Darkness really are the new saviours of British rock-n-roll. I do hope it goes their way. In a time when the charts are riddled with Emo and Pop Punk, The Darkness stand out like a sore thumb. How long they can keep up this hype, style, and downright silliness remains to be seen. For the moment, I say go with the flow. You’ve got nothing to lose, let yourself get tangled up in the hype machine—you won’t be disappointed.

Looking back on this review, I really don’t disagree too much with what I wrote or my feelings on the album. I do however think Permission to Land has aged very well—if anything it sounds better now than it did back then. The Darkness still stand out like a sore thumb in the history of British rock. But if anything, the time for big cheesy rock music is now rather than back in the early noughties, and this album still gets plenty of airplay. During these crazy Covid times, ironically the Darkness time is now!