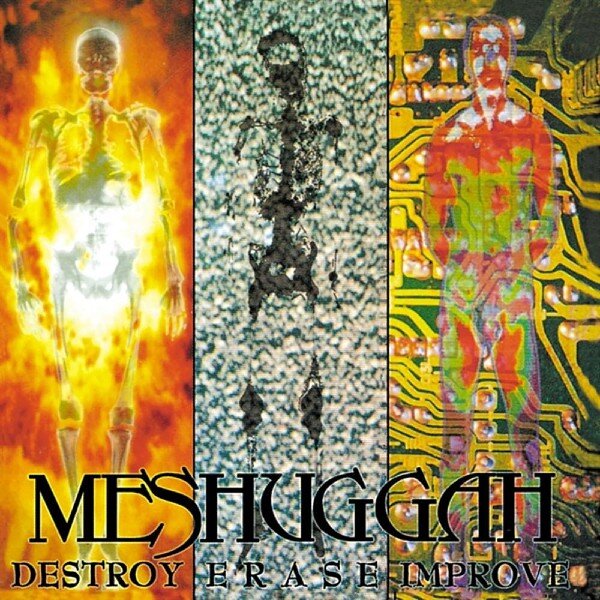 Release Date: 07/25/1995
Label: Nuclear Blast
Genre: Progressive Metal/Thrash
Reviewed by: Brian Gmutza/Eric Gmutza
Note: These reviews date all the way back to the year 2003. Their tattered remains were recently exhumed from the festering grave of firesideometer B.C. for your viewing pleasure.

Any time artistic conventions are chucked out the proverbial window, there is typically a debate, be it internal or external, about the merits of the product. Take, for example, pop artist Andy Warhol. Some say that his soup cans are true pieces of art that make a statement about the constraints of art conventions and truly expand what one considers to be art. Others say that it’s just a frickin’ soup can. The point being that artistic conventions are generally there for a reason, and working outside of them can be freeing or just downright confusing, depending upon your perspective.

Such is the case with Meshuggah’s Destroy Erase Improve, a mind-boggling record that offers an aural swift kick in the ass of the staid metal scene. Meshuggah essentially destroys metal as we know it and rebuilds from the ground up, creating a metal masterpiece that serves as a blueprint for intelligent metal artists and fans.

Opener ‘Future Breed Machine’ is a microcosm for the record as whole, combining more time changes than a transatlantic flight, with extremely fast riffing and a guttural yell not unlike that of Max Cavalera of Sepultura. One can’t help but be beaten over the head immediately by the down-tuned guitars that serve more of a rhythmic than melodic function. The lyrics and strange jazz-like guitar breaks help to create a cold, metallic, almost futuristic feel to the record – sort of like Voivod’s Dimension Hatross performed by Napalm Death. The result is a wholly engaging cohesive whole that exudes both testosterone and intelligence in spades.

Though it is certainly a watermark in the metal music scene, Destroy Erase Improve is not without fault. For starters, the rhythmic nature of the guitars leads to a noticeable lack of melody in most of the tracks. And although the frequent time signature changes and tempo variability are what makes the album stand out, there are times when they feel somewhat disjointed, as if the drums and guitars are not playing the same sheet of music, so to speak (‘Beneath’ is a good example). Therein lies the artistic debate: does it sound disjointed because my ears have been trained to hear music according to traditional music conventions, or is it because it truly is somewhat disjointed?

In any case, the quibbles are relatively minor and can be overlooked when the ingenuity of the album as a whole is considered. Destroy Erase Improve is a landmark record and any self-respecting metal fan owes it to him or herself to check it out.

It's interesting to read what it was like to discover Meshuggah before everyone was down-tuning and your mom was listening to djent. When I'm in the mood for the band, I rarely pull this one out, so I'm inclined to bump it down a half point. However, I'll stand by this review, hyperbolic though it may be, with the note that everything's in 4/4... the polyrhythms only make it feel like the time signature changes.

I'm right with Brian on this one. I remember hearing this at my friend's apartment nearly a decade ago (2.5 decades ago now - 2020 Eric). At the time, there was simply nothing else like it in the world of metal. My reaction that day was something along the lines of, "What the fuhhhhhhhh.....?" Eight years (and several rubber-suit-wearing spazzcore acts) later, Meshuggah's Destroy Erase Improve holds up surprisingly well as one of the most intense extreme metal albums ever recorded.

I'm not sure why I never listened to any of the band's subsequent releases. Maybe because I honestly believed there was no way they could possibly make a better album. Though from what I've heard, Chaosphere and Nothing are every bit as interesting. So off to the record store with me...

Well, I did end up going and listening to more Meshuggah 17 years ago, and over the years I've come to enjoy most of the band's albums a fair deal more than this one. I stand by ‘Future Breed Machine’ as being a perfect extreme metal song that needs to be heard by everyone (EVERYONE!!!), but aside from that, I'm rarely drawn back to this album. Nothing, Catch ThirtyThree, and Obzen tend to fit my listening patterns more these days. If you've never heard Destroy Erase Improve, by all means check it out. It's a very cool bridge between thrash metal and the sound Meshuggah would ultimately become known for.