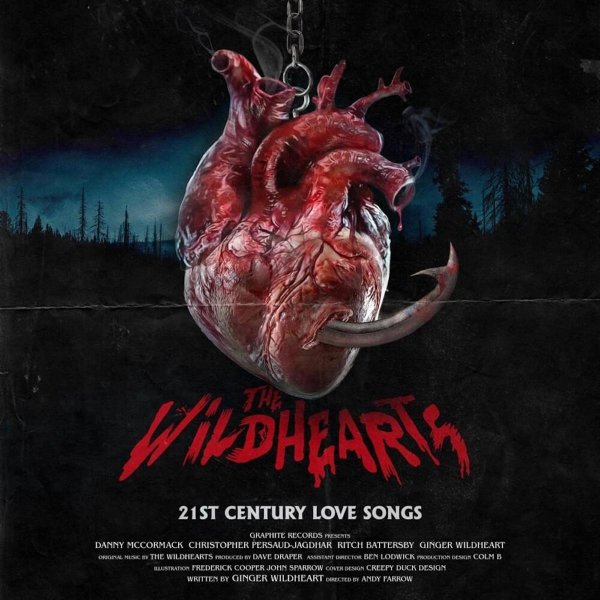 It’s not every day the best rock band on the face of the earth puts out a new album, but lucky for us, it’s been happening with much greater frequency of late. Why, it was just a few years (though a totally different world) ago that this fan-favorite lineup came out of hibernation with Renaissance Men and the follow-up Diagnosis EP. All signs pointed to the band being in the midst of a creative surge, particularly after the release of CJ’s own stellar solo album, Siege.

But then the first single for 21st Century Love Songs dropped, and...let’s just say I was underwhelmed. I didn’t dare listen to the next single, as I was afraid it too would disappoint, and I didn’t want to go into this album with a shitty attitude. So with as open a mind as possible, and after listening to this beast like it’s my job for the past 72 hours, let me break it down for you track-by-track. This is an early review, so I reserve the right to update these scores after a few hundred more listens.

The Wildhearts keep their flawless streak of stomping album-openers alive with the title track. Compositionally, ‘21st Century Love Songs’ would fit in on any of the band’s first three albums, only now it’s enhanced by the filthy patina of Ginger’s aged-to-perfection vocals and a guitar tone and production that’s only gotten beefier and nastier over the years. This is The Wildhearts sounding like they just crawled out from under a grimey old pub bar, wiped the crust from their eyes, and got straight to work cracking bottles over people's heads. 9.5/10

As I noted in the intro, when I watched the video for this, the first single off the album, I wasn’t just unimpressed, I was flat-out concerned. The lyrics are a touch maudlin, and Ginger’s vocal chords sound about as shredded here as I’ve ever heard them. It all plays better in the context of the album, with the more experimental elements in the song’s last third flowing naturally from the chaotic energy established in the album’s first track.

That said, the song’s placement this early in the sequencing is questionable. Being charitable, I’ll suggest that I might have enjoyed it more as a deeper cut, at a more reflective point in the album’s rhythm. Being uncharitable, I will note that you could cut this song off the album and 21st Century Love Songs would still be 3 seconds longer than Renaissance Men.  5/10

A straightforward banger that benefits from having verses good enough to be choruses. Ginger has never been shy about acknowledging the debt the band owes to Motorhead, and here we have a song that rocks with the grizzled, biker-punk spirit of the great Lemmy Kilmister, coupled with the sing-along quality of that other well-known Wildhearts influence, Cheap Trick (dig that breakdown around the 2:40 mark). 8/10

One of the more challenging tracks on the album, ‘Institutional Submission’ gets off to a blistering start and proceeds to twist and turn through a labyrinthine, sometimes punishing song structure that would fit right in on the White Album. I’m 10 or 12 listens in, and I’m still having trouble getting my head around it. It’s definitely a fascinating song, and perhaps time will reveal it to be a great one. For now, it’s got a few too many ideas and is a touch overlong for my tastes. But I’d rather hear the band taking chances like this than not. 7/10

This is a tricky little song. It skips along for most of its play time like a good little Wildhearts filler track. But then it really comes alive in the second half after a jaunty mid-track diversion. It’s another very White Album composition, but the spirit harkens back to the no-fucks-given attitude of Earth Versus... 7.5/10

When people come up to me on the street and ask what the last truly perfect Wildhearts song was, I say ‘Bi-Polar Baby’ without hesitation. But ‘You Do You’ has me rethinking that. From its opening riff to what might be the catchiest chorus on an album full of catchy choruses, ‘You Do You’ just feels so right. The lyrics strike that perfect mix of humor and cynicism that has always set The Wildhearts apart from their peers. 10/10

7. Sort Your Fucking Shit Out

If any band can deliver a track that lives up to a title like ‘Sort Your Fucking Shit Out’, it’s The Wildhearts. There’s nothing fancy here—just a good melody and lyrics you’ll still be singing to your spouse 20 years from now. In that regard, consider it the spiritual successor to ‘My Baby is a Headfuck’. 8/10

It’s sort of a toss up between ‘You Do You’ and ‘Directions’ for best chorus (and best song) on this album. They’re both pretty fantastic, but that beatdown of a riff at the 2:53 mark of this one is just plain sick. Such a killer track. 10/10

Ok. It’s getting pretty clear at this point that 21st Century Love Songs is seriously back-loaded with smoking hot bangers. Who sequenced this album? This song is a rip-roaring good time, and brings a Scott Ian-level mosher of a riff to the pre-chorus. Speaking of, this is the fourth track in a row with a chorus that is guaranteed to haunt every waking moment that you’re not listening to this album. 9.8/10

The album closer starts off sounding a bit like Billy Squier’s ‘Everybody Wants You’ (no complaints here), before visiting some pretty dark places both lyrically and sonically. It’s emotionally raw, and sometimes disturbing, but it’s so adventurous that it’s never the downer it might have been in the hands of just about any other band on Earth. 8.5/10

So that’s the track-by-track review, but the real test of an album is how it all fits together, and I’m thrilled to report that 21st Century Love Songs is more than the sum of its many mind-blowing parts. If Renaissance Men was the old gang getting back together and proving to themselves that they can still be The Wildhearts, then 21st Century Love Songs is that band stepping out from their own formidable shadow and crafting their most inspired and confident album in decades.

Buuuuuuuut, as Ginger laments, “God, everybody is an expert these days,” and I’d be lying if I said I wasn’t a touch baffled by the track sequencing. I’m a big proponent of front-loading albums with their best tracks, and I can easily imagine an alternate 21st Century Love Songs sequencing that would have me screaming from the rooftops that this album actually rivals Earth Versus and P.H.U.Q As it stands, I think a strong case can be made for it being their best since those heady days (though Must Be Destroyed won’t be going down without a fight). Wildhearts superfans are going to eat this up, and non-Wildhearts superfans...well those are just people who’ve never heard The Wildhearts before, aren’t they?