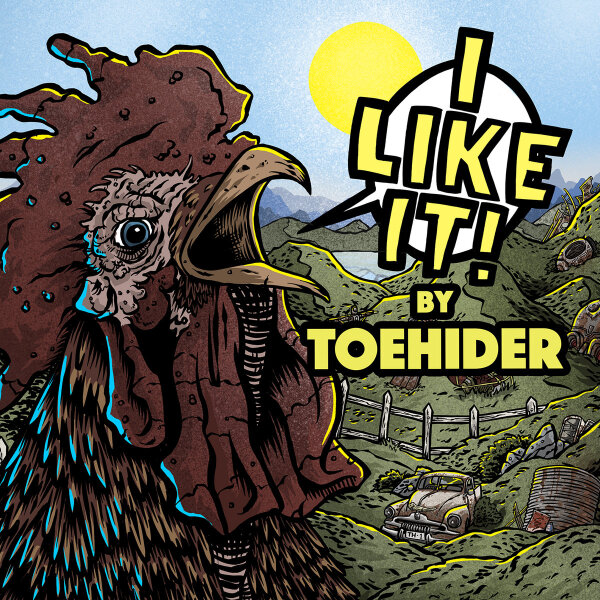 My first exposure to the madness of Mike Mills (aka Toehider) came via his performance as TH-1 on Ayreon’s fantastically nerdy 2017 album, The Source. That album was so fun and batshit crazy that it demanded a deep dive into the music of just about every contributor to it. This brought me to Toehider’s 2014 album What Kind of Creature Am I?, one of the coolest mashups of prog metal, electronic, classic rock, 80’s pop (and Queen, lots of Queen!) you will ever hear. Follow up, GOOD, was a bit of a letdown for me, perhaps because WKoCAI set the bar so impossibly high. That album was such an explosion of musical genius that it would be perfectly understandable if Mr. Mills’ needed a tweener album to refill the tank.

Which brings us to Toehider’s latest effort, I LIKE IT, which gets off to a rousing start with the positively ripping, ‘GO FULL BORE!’. It sounds a bit like if The Darkness joined forces with Squarepusher and Dragonforce, but occasionally forgot what they were doing and became a blistering black metal band or 80’s synth pop act. This spastic, musical identity crisis is what makes Toehider so fascinating and it’s great to hear it in full effect right out of the gate.

Follow up, ‘wellgivit’ is a bright bit of 80’s electro-pop—reminiscent of United-era Phoenix—catchy as hell and an all-around good time. Then, just when you think you’ve got a feel for where the album is going, ‘Rancorous Heart’ comes along and it’s...a little hard to put a finger on. It’s as serpentine in structure as any of Mill’s more audacious experiments, but folkier and surprisingly earnest when the chorus hits. It’s a good song, but one that introduces a handful of slow growers to the album’s mid-section.

It’s not until ‘The Ultimate Exalter’ rolls in that the album regains the head of steam it had going at the end of ‘wellgivit’. It’s a slower song, but has a welcome focus to it after a string of Ayreon-esque musical theater that’s a bit much at times. These songs aren’t bad, but they’re of a different type than the more immediate songs on the rest of the album. This is the fine line Toehider often walks—the man’s unbridled creative energy is what makes his music so exhilarating, but he does sometimes go off on a tangent or three that detract from the flow of the album.

Apparently, this collection of songs was selected by Toehider’s Patreon supporters, so I missed my chance to dictate the album’s tracklist. But if I were calling the shots, I’d have preferred a shorter, more focused effort that saved tracks like ‘Moon and Moron’, ‘Concerning Lix & Fairs’, ‘The Guy That No-One Really Knows’, and ‘Bats Aren’t Birds’ (maybe? It's growing on me) for a super nerdy EP to tide us over between full lengths.

Fortunately, there are plenty of hits in the second half of the album. ‘Died of Dancing’ is a bona-fide blockbuster. Any time Mike Mills channels his inner Lionel Richie, you know it’s going to be a good time, and ‘Died of Dancing’ scores pretty high on the Toehidionelrichie-ometer. The final three tracks on I LIKE IT are all pretty exceptional as well. ‘He’s There...And Then He Does THAT’ has a joyous, beautiful melody to it, ‘How Much For That Dragon Tooth?’ out-Darknesses The Darkness (of late), and the chorus of the title track is so goddamn heartwarming that you just want it to go on forever.

Scoring this one is going to be a challenge. If I were to rate the album as it has been presented by its creator, I’d give it a solid 7/10. However, if I narrowed it down to my own 40 minute cut sequenced just how I like it, then it’s easily a 9/10. I’ll split the difference then and give it an 8.0, which hopefully conveys that I LIKE IT, while not flawless, is an album that deserves your attention.