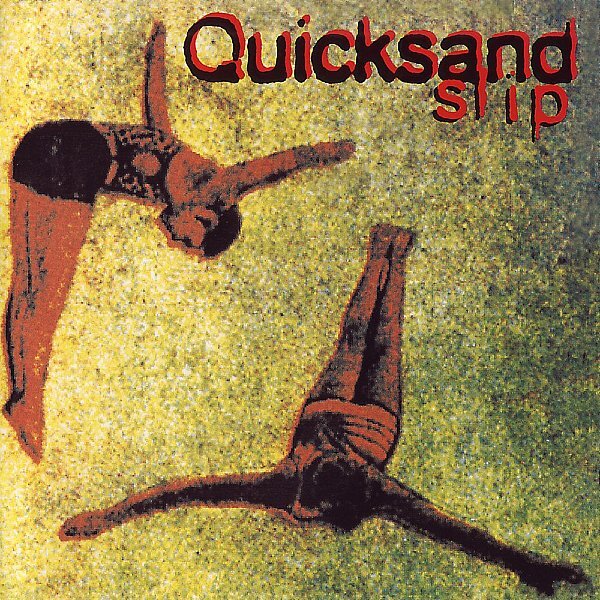 Release Date: 02/09/1993
Label: Polydor
Genre: Post-Hardcore
Reviewed by: Eric Gmutza
Note: This review dates all the way back to the year 2002. Its tattered remains were recently exhumed from the festering grave of firesideometer B.C. for your viewing pleasure.

Quicksand's Slip pretty much got me through high school. I guess like a lot of teenagers, I was always pissed off about something, always feeling alienated from the people around me for one reason or another. People tended to cluster together into social cliques that I never felt a part of: Jocks, Metalheads, Geeks, Hicks, Punk/Grunge Scenesters, etc. - kind of a class system. Jocks made fun of Geeks, Scenesters made fun of Jocks and Geeks, Hicks made fun of Scenesters, and the Metalheads hated everything but Slayer.

It's all pretty silly in retrospect, but at the time, fitting in felt like a biological imperative. And I just couldn't find a way to make it happen. And then I heard Quicksand for the first time. Slip took every ounce of anger, sarcasm, disgust, and alienation I ever felt and put it into words and music. Most kids in the 90's had Nirvana's Nevermind, but I had something better. I had Quicksand's Slip. It was the perfect channel for every negative emotion I had, but more importantly, it offered hope. Here were these badass, pissed off rockers saying it was okay to feel upset, to feel alone, to feel like you wanted to bang your head against a wall. It encouraged free thinking, breaking the mold, just being yourself and saying, "Hey, fuck you guys and your cliques in the cafeteria. I'll Dine Alone on my sloppy joe over here by myself."

I learned more coping skills from this album than any motivational speaker they ever subjected us to back then. It wasn't forced and it wasn't part of some bullshit scene. It was just an honest, intelligent connection between a band and its listeners. I don't even know for certain that Quicksand's music was really about any of the things I felt it was about. But that's the mark of an album with great lyrics isn't it? The listener gets to make of it what they will.

All that, and the music ruled too. When most people talk about influential bands in the 90's, they usually mention the Pixies, Nirvana, Jane's Addiction, etc. But Quicksand often gets ignored, despite providing the blueprint for post-hardcore, emo, and everything in-between. Since then, It's been subverted by countless rap metal and emo bands, but it's also been perfected, expanded upon, and honored by brilliant bands like Fireside, At The Drive-In, and the Refused among others.

I keep trying to write about this actual album, but I'm finding it impossible to do. It's like trying to write a critical review of the movie Star Wars. Sure, you could get all literary about it, but why? It's one of those perfect bits of entertainment that's so immersive that it completely changes your life forever. It becomes more than a work of art or a piece of entertainment. It becomes a part of who you are.

I can't promise that this album will mean the same thing to you. Especially not ten (or nearly thirty!) years after the fact. But if you're into any of the current wave of emo and hardcore bands, you really ought to be intimately familiar with this band and this album in particular. Every song on Slip rules. It's a classic that I'd score an 11 if I could.

My love for this album hasn't changed one bit, though I will admit there was a fair amount of cringing while re-reading this review. I was only seven years out of high school when I wrote it, so that was all still fresh. I'd honestly forgotten how frustrating a time that was, and I'm old enough now to see how much of that frustration was of my own making. I'd write a different review today, but I don't think it would do a better job of capturing the impact this album had on me.