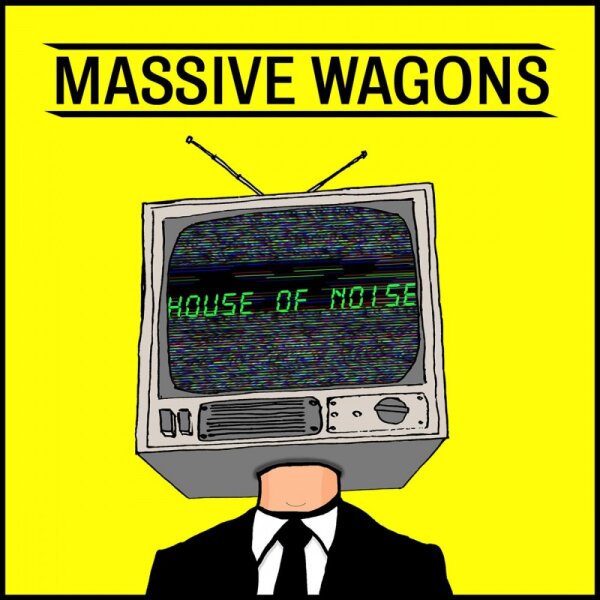 Massive Wagons have been on an upward trajectory since the release of their last album Full Nelson in 2018. That album made the UK Top 20 due to heavy touring, energetic live shows and radio airplay. It also made my EOTY list in 2018 too due to its smart lyrics and love for classic rock acts such as Status Quo and The Wildhearts. If I’m honest, it was something of a grower though, taking its time to get its hooks into me.

The same cannot be said for House of Noise. This album is an immediate kick in the face, a downright party banger, and one of the best feel good albums I’ve heard in ages. Lead single ‘In it Together’ kicks off the album in rousing style and is the perfect track to get you through the pandemic, with its chorus of “Maybe it's the realisation that we’re in it together”. ‘Banging on your Stereo’ with its fantastic LEGO themed music video and ‘House of Noise’ follow making these first three songs one of the best sets of opening tracks on any album released this year.

Massive Wagons are not a one trick band either, with Full Nelson featuring a number of left turns. ‘Hero’ is a huge blues ballad recalling AC/DC and Deep Purple and ‘Professional Creep’ is a furious, riff shredding heavy metal number pushing into Wildhearts/Metallica territory and brings a welcome element of aggression to the album.

There are two other notable tracks to highlight. ‘The Curry Song’ is as silly and fun as it sounds—if it’s ever released as a single, it will likely send the band to the stratosphere. The song recalls the joys of a late night curry after a night out, and couldn’t be more English if it tried. If you remember Terrorvision, you’ll definitely remember their track ‘Tequila’ which became a No.1 single in the UK. ‘The Curry Song’ has the same feel-good factor with an insanely catchy chorus that could be sung across pubs and university halls for years to come. I thought I was going to hate this track due to its silliness, but it actually works really well in the context of the album. The only other band who could possibly pull off rhyming rogan josh with mosh (and turn it into a heavy metal stomper!) is The Darkness.

Finally, the album closes out with a ‘Matter of Time’, an 8 minute prog-rock ballad that ends up getting heavier and heavier as it proceeds. It’s the first time I hear an undeniable Wildhearts influence on Massive Wagons. Much like that band, Massive Wagons have the ability to be fun, heavy, emotional and honest—a combination that’s sorely missing in the modern world.

House of Noise entered the UK charts at No.9, which is a fantastic achievement for an “unknown” English rock band. It's only going to be a matter of time before Massive Wagons are headlining stadiums across the world, so listen to this album now and remember where you were when you first heard it.

House of Noise will put a smile on your face, and sometimes that's all music needs to do. It also happens to be an absolute barnstormer of an album.
Chris Coleman-Peers -08/10/2020