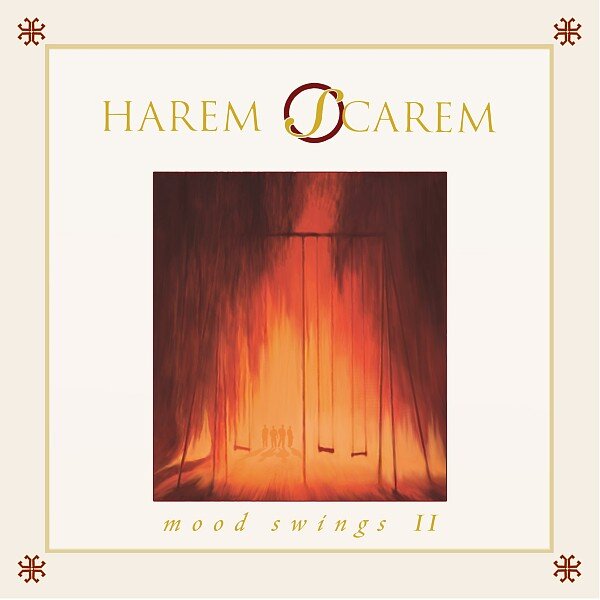 Welcome to part two (and three?) of my fourteen (or sixteen?) part series of track-by-track reviews of every Harem Scarem studio album. Today, I’ll be looking back at Mood Swings II, the 2013 re-record of the band’s 1993 album, Mood Swings. It also happens to be the first Harem Scarem album I ever heard, and kicked off a love affair that has only grown stronger over the past seven years. Re-recordings of fan favorite albums are pretty much destined to end in disaster, but Harry Hess and Pete Lesperance eat cynicism for breakfast, lunch and dinner, so anything could happen. Let’s dig into it and see if Harem Scarem somehow, against all odds, manage to pull if off.

The album kicks off with a playful little lick before ripping into what is probably the heaviest, gnarliest riff of Harem Scarem’s career. Based on that opening riff, I honestly thought the band might be a melodic death metal act along the lines of Soilwork or Scar Symmetry. That, of course, turned out to be laughably off the mark, but fans of those acts who appreciate their melodic rock influences will probably enjoy this track.

I could write an entire post about this song alone. Great chug in the verses, Harry’s voice sounds amazing, and the chorus is the kind of thing Hot Rod hums to himself while using the matrix of leadership to destroy Unicron. If this song doesn’t do it for you, then Harem Scarem might not be the band for you. While their catalog is deep with high quality bangers, I can’t think of one that’s better than ‘Saviors Never Cry’. It’s the standard by which all other Harem Scarem songs are judged...by me, anyway. 10.0

Pure Hagar-era Van Halen, from the song’s a capella-style chorus opener to the radio-friendly, but super tasty licks and solos peppered throughout. If memory serves, I resisted this track’s considerable charms for several listens (truth is, I’m not a huge Van Hagar guy) before finally letting it in. There’s just no denying the chorus on this song, and the guitar solo at the 2:35 mark never ceases to amaze. 9.8

The first of a handful of power ballads on Mood Swings, and it’s a damn good one. It’s got a lot of Hysteria-era Def Leppard coursing through its veins, both in the opening bars and in the call and response vocals of its ridiculously catchy chorus. Pete Lesperance’s leads on this track are excellent, and the solo at the 2:34 mark is sweet and whimsical, really taking the song to the next level. 10.0

Honestly, the first 1:20 of this song is a little cheesy with the waka-waka guitar and the slightly cringey, “this is my rollercoaster…” intro verses, but once things kick off proper, ‘Change Comes Around’ is a good time. The pre-chorus and chorus are energetic and earnest as only Harem Scarem can be, and the lead work on this track...holy hot licks! Oh, and just try to resist that breakdown at the 3:30 mark—you knew they were going to do it… you were afraid it would be super hokey when it happened...but then they did it, and it was everything you feared, but it still kind of ruled. 8.0

Definitely my least favorite song on the album and one of the very few Harem Scarem songs I just don't like. The chorus is great, and I’ve never heard a Pete Lesperance solo I could complain about, but the rest of the song’s funk-rock leanings just aren’t for me. That said, I know a guy whose opinion I sometimes respect, and he SWEARS by this song, so go judge for yourself. 4.5

Holy smokes, this song. I often wonder when a band writes a song like this if there’s a temptation to try selling it to a big arena-rock act and just live off the royalty checks for the rest of their lives. I don’t know how it all works, but I’d imagine the guys from Journey would sell their souls to have a song like ‘Sentimental Blvd.’ in their pocket. Great riff in the verses and sometimes-drummer Darren Smith kills it on the vocals. What a chorus! 10.0

A gorgeous guitar solo segue in the middle of the album. It’s beautiful and demonstrates why Pete Lesperance deserves to be mentioned in the same breath as the rock and roll guitar gods. ‘Mandy’ makes the short list of guitar solos that have ever made me get a little verklempt. 10.0

One of the heavier riffs on the album, and there are a lot of cool little guitar flourishes on this song. It’s got a lot going for it, and hints at some of the band’s proggier leanings that would be explored further on the excellent Voice of Reason. But there are also a few awkward waka-waka funk-rock bridges amidst the verses that just don’t work for me. A shame because I do like how adventurous the rest of this track is. 7.0

Not just one of the best Harem Scarem power ballads, but one of the greatest power ballads OF ALL TIME! The first 60 seconds of this song are just plain stunning. I wonder if Harry regrets hitting that high note? Does he ever do it live? Was it a challenge to hit it for the re-recording, 20 years later? Wouldn’t it be cool to hear Devin Townsend cover this song? 10.0

I don’t listen to this song as much as I ought to. It’s a simple arrangement that really showcases Harry Hess’s lovely voice. It gets a little lost in the shadow of the complete package that is ‘If There Was A Time’, but it deserves better than that. 8.0

Plenty of hot licks to appreciate here, but on the whole I’m kind of ‘meh’ on ‘Had Enough’. It’s got just a hint of a country-rock vibe that will begin to haunt me on future Harem Scarem albums. 6.0

The first of three new tracks recorded for the re-release, ‘World Gone To Pieces’ is just good enough to prove that Harem Scarem’s reunion is worth paying attention to. It’s not one of my favorites, but there’s nothing wrong with it. 6.0

I feel pretty much the same about this as I do about ‘World Gone To Pieces’. It’s fine. 6.0

This is a nice song. Honestly, I think if it were the only bonus track on the album, it would have left me even more excited about the band’s comeback than with the other two accompanying it. They sound confident here, like a band that still has something to say. And most importantly, the song makes me feel something, which has always been Harem Scarem’s biggest selling point. 8.0

There you have it. Re-recordings are almost never a good idea, but there are always exceptions that prove the rule, and Mood Swings II is just that. The production is top notch, the band sounds amazing, and perhaps most importantly, Harry’s voice sounds even better than it did on the original recordings. By some glorious deal with the devil, he’s managed to gain all the life experience and gravitas that comes with age while avoiding any discernible weakening of his voice.

The performances are so strong, that I honestly see no reason to revisit the original recordings, which—by comparison—sound like rough demos of the fully-realized versions delivered here. I’d be curious to know if fans who’ve been with Harem Scarem from the start feel differently. In any event, if you’re new to this band, Mood Swings II is an excellent place to start. Is it my favorite Harem Scarem album? I wouldn't want to spoil my fourteen (or is it sixteen?) part series with an answer. But it's definitely in my top three.

While a few tracks don't do much for me, the fact that so many of these songs are next-level amazing makes this an essential hard rock album.
Eric Gmutza -09/07/2020