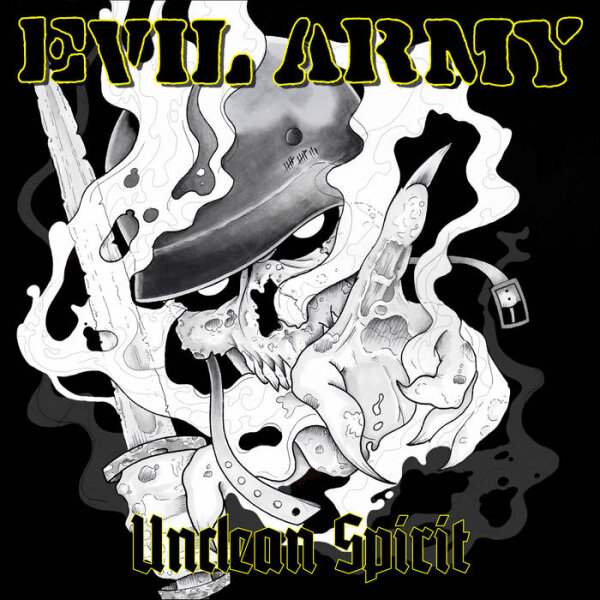 If you caught our Top Five 21st Century Thrash Bands You Might Have Missed list, you'll know that we're big fans of Evil Army's 2006 self-titled debut. That album is a total crossover thrash onslaught that actually stacks up against any thrash album from any era. It's that good. While Evil Army's output since then has been sporadic, it's been totally consistent in quality. The band's latest 7", Unclean Spirt, finds the band down to just one member: singer/guitaritst and principal songwriter, Rob Evil.  Can one man maintain the thrash assault that makes Evil Army stand out from the pack? Let's go track-by-tack to find out.

Classic Evil Army—the riffs are simple and effortlessly catchy, and the vocal delivery is as raw and memorable as ever. Rob's cadence during the chorus is particularly interesting, elevating the lines “Death by machine. Death by gun. Machine gun…death” to an infectious, violent poetry. It's all delivered with conviction, to the point that when Rob yells, “KILL!!! Voices tell me to kill,” it's honestly a little disturbing. My only beef with the track is that the tempo feels just a touch slow. The songs on Unclean Spirit are all mid-tempo by Evil Army standards, but `Machine Gun Death' is the only one that feels like it might be even better if it were played faster. But that's what live shows are for right? A killer track either way. 9/10

2. No Escape From The Attack

This one's got a cool Misfits-esque, psychobilly thrash groove to it. It still sounds like Evil Army through and through, but it proves that the band can do a lot more than just tear your face off. The solo in the second half of this track is quite good, calling to mind early Kirk Hammett, or “shithead Dave-era Megadeth” as the band's bio fittingly puts it. 9.5/10

Another effortless-sounding mid-tempo stomper with a thoroughly evil vibe and a chorus that brings to mind Morbid Tales-era Celtic Frost. Evil Army make this all sound pretty easy, but hundreds of forgettable thrash bands have spent the last 30 years proving otherwise. While it's my least favorite of the three tracks, this is still a great tune—one that I could see filling out a full-length album quite nicely. 8/10

There you have it. Evil Army are back, and they still rip. Go buy the album.