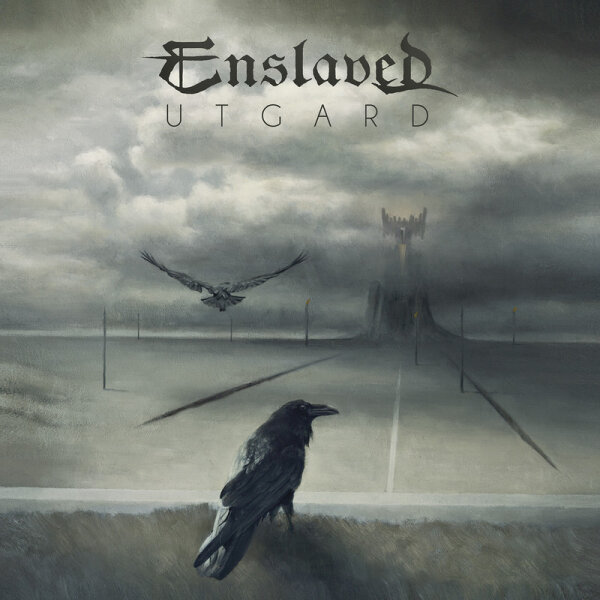 Enslaved are one of a handful (or two) of bands who have changed my tastes in music. My first exposure to them was 2006's Ruun, which was the first album to convince me that black metal could be more than just shrill, raspy shrieking over tremolo picking and blast beats. It was a gateway to many other amazing black metal acts, and it also precipitated a deep dive into every Enslaved album that came before and after it. Below The Lights, Isa, and Ruun remain the holy trinity for me, but I've enjoyed every album since and still consider each new release to be a big deal.

While E and In Times didn't blow my mind, there was still enough magic there to keep me excited about what this band would do next. So let's dig into Utgard and see how it goes.

1. Fires in the Dark

This starts off about the way you’d expect, with some good old-fashioned Nordic chanting. But then it quickly segues into an acoustic intro which is a little unexpected for Enslaved. The two merge together before transitioning into a Monumension-esque bridge that finally gets us into the song proper, which is a driving, uptempo track peppered with a pretty cool, slightly videogame-y melody. There’s a lot going on here, and it’s great to hear the band stretching themselves right from the start.  7.8/10

A nice back and forth here between a gnarly intro riff, a galloping bridge, and a swirling black metal tempest that charges into the chorus. It all hums along nicely for the first three minutes, before an abrupt transition to a rather tasty riff that plays out for a full minute of proggy goodness. A somewhat formulaic Enslaved song, but it’s got enough flourishes to be engaging throughout. 7/10

Now we’re talking! Killer riff on this track, with a propulsive rhythm that drags you along for the first minute without letting up. The solo around the 1:50 mark is really nice, and I love all the little bass, rhythm guitar, and drum flourishes going on behind it. Things start to get a little weird in the second half, and I’m not sure the off-tempo videogame level-up sound fx do anything but clutter the song. Fortunately, that driving rhythm comes back and finishes this one off strongly. 8.5/10

After nearly 30 years and 15 albums, what’s reasonable to expect from a band like Enslaved? When it comes down to it, I guess I want to hear something that doesn’t sound quite like any song Enslaved have done before but still sounds exactly like the sort of thing Enslaved would do. ‘Homebound’ is a perfect example of this. It’s exciting and completely original, but still sounds like Enslaved through and through. The opening riff is killer, the melody over top is gorgeous, and the song structure is flawless from beginning to end. I love everything about this song. 10/10

I could take or leave this one. It’s almost entirely spoken word with just a hint of ambience behind it. I’ve listened to the album with and without it, and it’s fine either way. It’s a nice lead up to the next track, and adds a sense of grandeur to the album if you’ve got the patience for it, but it does detract from the momentum building after the excellent 'Sequence' and ‘Homebound’. 5/10

Nice keys kicking this one off. Again, this sounds unlike any other Enslaved song I can think of, but still feels just right. I like the break from harsh/soft, quiet/loud, black metal/Pink Floyd dynamics the band tends to lean on these days. ‘Urjotun’ would work fine as an instrumental, but the bridge in the midsection brings in vocals, and layers the guitars and ambiance in a way that builds tension quite effectively. 8/10

7. Flight of Thought and Memory

If some up-and-coming metal band dropped this song, I’d be screaming from the rooftops about them. But the standard is so high for Enslaved that a song like ‘Flight of Thought and Memory’ is a little underwhelming at first. It uses a lot of very familiar dynamics, and would be right at home on just about anything post-Ruun. But it does have a lot going for it—including a lovely chorus and a guitar solo at the 3:34 mark that takes you on a sweet ride. If there’s a sleeper hit on Utgard, this is it. 7.5/10

Solid rock riff starting this one off, and I love the haunting melody played over it. Like the track that precedes it, this is post-Ruun Enslaved by the numbers, which isn’t necessarily a bad thing. I love that dirty riff that kicks in at the 2:25 mark, and the transition back to the intro riff with the solo over it at the end is not too shabby. 7.0/10

The final track finds the band flying the Pink Floyd flag again. This is not my favorite song on Utgard by any stretch, but I do appreciate the dramatic weight it adds to the album. It’s a fitting album-closer, with the callback to the acoustic guitar from the beginning of ‘Fires in the Dark’ being a particularly nice touch. 6.5/10

So Utgard is a solid album, but that’s to be expected with Enslaved. The real question is whether or not the band still has the capacity to surprise fans after a handful of albums that were perhaps a little too consistent. The answer for me is a qualified yes. I think the album is strongest in the mid-section where the more adventurous compositions give it a character of its own. It also helps that the songs on Utgard are shorter than those on any of Enslaved’s full lengths since Ruun. Enslaved excel at creating little pockets of awesome within songs that might otherwise grow stale, so the (relative) brevity works in their favor. Time will tell how Utgard stacks up to the rest of their catalogue. For now, I can say that I've enjoyed my time with it more than E and In Times, but less than Axioma..., Vertebrae, and RIITIIR.

Utgard flows well, doesn't overstay its welcome, and is eminently listenable. Check out ‘Fires in the Dark’, ‘Sequence’, ‘Homebound’, and ‘Urjotun’.
Eric Gmutza -10/13/2020