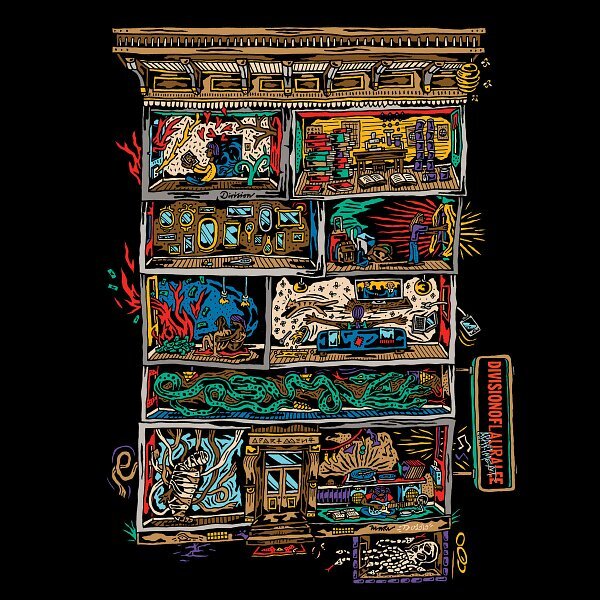 Over the past 20 years, Division of Laura Lee have quietly become one of my favorite rock bands. Some bands have landmark, blockbuster albums that immediately put them on your radar. You love them because of those one or two albums, and stick with them in the hopes of getting another taste of perfection. Other bands slowly chip away at you over the years with consistently good music that fills a niche in your listening habits that you didn't even know existed. Division of Laura Lee are that kind of band.

With the time between albums growing longer and longer for DOLL (seven years since Tree!), a new album is kind of a big deal. In celebration of this major event, let’s go track by track to see if Apartment delivers the goods.

Right off the bat, this just feels right. I liked Tree, but it left me a little concerned that the band was filing down the rough edges that made them so appealing. Those concerns are put to rest with ‘Sit Up Straight’, which bristles with the kind of garage-punk energy that would fit right in on Black City or Das Not Compute. 8.5

While I love both vocalists in DOLL, it seems the tracks Per Stålberg sings on are the ones that punch me in the chest the hardest. ‘Dodge Bullets’ is another raw, buzzing slab of rock with all the qualities that make this band stick to the ribs. It’s dirty and angry, but contrasted with a uniquely Swedish sweetness and sincerity in the vocals that makes the band sound simultaneously dangerous and slightly adorable. They may be pissed, but you’ll never convince me these guys are anything other than total teddy bears. 9.5

Great momentum through these first three tracks. This one has a nice Fugazi vibe to it. Honestly, it took a few spins for the vocal hook in the chorus to work for me. It felt a little too straightforward initially, but the lyrics pull this whole song together. It might help that we’re in the midst of a global pandemic, but I think this song works outside that context. Many of us middle-aged dudes have needed a rock through the window to get us out of the house since well before COVID-19. 8.0

This song is a straight-up banger. DOLL have never been shy about advertising their influences, and ‘Hollow Pricks’ is a sonic love letter to Drive Like Jehu and Hot Snakes, particularly in the verses. But again, it’s that contrast of angular, stabbing riffs with Stålberg’s charming lyrics and delivery that put the song over the edge. There’s something about the way he sings, “I got my own plans....thoughts….ideeeeeeas,” that puts a silly grin on my face. 9.8

The first of two slower tracks on Apartment, Safe is a breezy, surfy tune with a fuzzed out Swervedriver-esque lead melody punctuated by some sweet, reverby new-wave claps. DOLL have a long history of writing great downtempo songs, and ‘Safe’ is no exception. I’ve always wanted to hear Jonas Gustafsson say he’d be my BFF. 8.0

This is probably my least favorite song on the album. Musically, it’s fine, but the lyrics are just a little too on-the-nose for my tastes. It’s probably one of the more personal tracks on the album, and I do admire the spirit of the lyrics. I just get a little cranky when I know exactly what a song is about, and I wish the band had found a way to make this one more open to interpretation. 5.5

The rhythm riff on this one is just a touch too similar to ‘Dirty Love'. It’s a by-the-books DOLL song that builds to a satisfying crescendo in the final third and is notable for Stålberg’s almost guttural vocals in the verses. 7.0

There’s no arguing with that opening riff once the rhythm guitar kicks in—it’s super nasty. Lots of interesting dynamics on this track and a slightly creepy, ethereal performance by guest vocalist Johanna Hellqvist. 8.0

Another fairly straightforward rocker, but it’s everything you’d want from a top tier deep cut. Uptempo with a great stomp in the rhythm section. In fact everyone is convincingly killing it on this one. It’s not one of my favorites on the album, but I never feel like turning it off when it comes on. 7.8

This song is just plain gorgeous. Like the best of DOLL’s slower songs, ‘Always Around’ is simple, melancholic, and subtly infectious. Relative newcomer Viktor Lager sings on the track and sounds like he’s been in the band since the beginning. If you're not blown away by this song, try it again at the end of a long day, with the lights down low. 9.5

On the whole, Apartment is an impressive rock album. It's a bit front loaded with quality tracks, but ‘Curtains’ and ‘Always Around’ make the second half well worth sticking around for, and the songs in between are quite good too. If we’re lucky, the closing lyrics on the album—“neverending...always around”—are prophetic and Division of Laura Lee have no intention of closing up shop any time soon. At the rate they’re going it might be 2030 before we get another album, but if they can continue putting out albums of this caliber, I won’t be too mad about the wait.